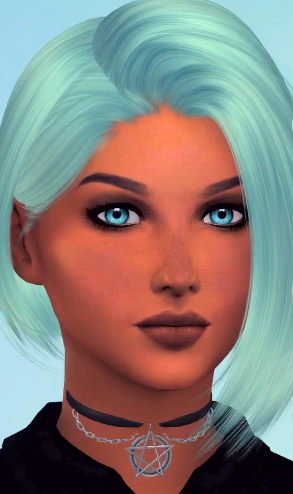 Macy Datta is a fictional bisexual character from the game series The Sims. The biological daughter of Diya Datta and Graham Edge, and the adoptive daughter of Salma Al Arabi and James Callery-Aiken. She is part of the LGBTQ+ community.

Macy had striking bright-blue eyes. She had a blue bob for most of her life but eventually grew it out. She dyed her hair black after the death of her adoptive mother, Salma. Later in her life, she cut her hair shorter again and dyed it to a mint / blue colour. Her style was emo / punk. Macy had a crush on both Noelle and Jaime Win and, since Clare did not plan her sexuality, she decided it would be up to her whims, making her the first sim to have romantic partners chosen this way. She is married to Akira, also a bisexual sim.